Interview: Doing career counseling in ninth grade is too late

Some people know from childhood what they want to become, others get to their profession by chance, and others have no idea what they really want to do. Available options and motivation play a big role in deciding on a future profession. The role of career counseling in our community centers is to guide children and youth on the path to self-discovery and gradually building their future career. With Lukáš Andrejčák, who until November led career counseling at the community center in Petrovany and currently works as a methodologist, we talked about whether career counseling is important for all children and why they start with it already in the 7th grade of elementary school.

How often do you organize career counseling in Petrovany and for whom is it intended?

We have career counseling once or twice a week and we meet as part of a group. It worked very nicely in the summer during the holidays, because the children didn’t have school, so we could meet twice a week. We already provide counseling with 7th grade students and we also deal with older students, for example 18- to 19-year-olds.

This is a relatively broad age group of children with whom you work. Why is that so?

The reason is that it is too late to do career counseling in the 9th grade. At such a stage, it is already too late to correct the grades, because in the 9th grade, children cannot change their grades from previous years. This can limit the possibilities of further study. After that, children often continue to study what they don’t enjoy. For example, when someone wants to be, let’s say, a car mechanic or a nurse, they need some advantage that they cannot correct or improve in any way in the 9th grade. Then suddenly these children find themselves in fields they do not enjoy.

You mentioned that you meet in groups. Are these groups divided by age, for example?

At the beginning, these groups were divided into younger and older children, but since attendance at our meetings is not mandatory, they went differently and mingled. It was difficult to divide them based on age, so nowadays anyone can come. Since the group is more diverse in terms of age, they can inspire each other. For example, we have a middle schooler who has started high school, and the younger kids see that. Another boy really wanted to go to high school, he is currently earning money in addition to dual education – during the school year, for example, he was able to save up for a driver’s license, which is very inspiring, especially for boys. They have this high school student as their great role model.

What do you primarily do in career counseling?

We focus primarily on informal knowledge and skills. These are the areas that will open the door to the labor market and to overall employment for children and young people. We teach them how to approach people, how to prepare for meetings, and so on. Having this informal knowledge is very important. But when we see that they have a problem in formal education, we try to involve the children in more complex activities, such as tutoring. Soon we will have a mentor who will take care of the children as part of individual tutoring, but will also accompany them on their life path during various events.

What can be imagined under informal education?

These are some unwritten rules of society and the middle class. For example, we go to Prešov for various events, where children see how various things work and experience something new that they have not yet experienced in their normal, routine life. These are, for example, things like ordering something in a cafe or buying something. When they enter high school, these are the biggest barriers. For example, they are afraid of traveling and approaching people when they need to ask something. This is exactly what we focus on in Petrovany.

Often our meetings are also about talking about their day at school or about things that are bothering them. We are thus looking for breakthroughs with their future career and professional direction. But we tend to talk about such matters at individual meetings, because there the children are not afraid of possible ridicule from their peers.

How do you guide children and young people on the path to knowledge, what would they like to do in the future?

For example, we ask them what they can do today for what they want to achieve. Let’s say that they like cars – we ask them what specifically they like about cars, so that they think and discover something in themselves that they may not have been aware of until now. We also try to uncover their motivation. It is also important for us that children get involved in activities and subsequently learn new things about themselves, but also about the labor market, professions and available schools.

Children from the majority society also have problems with choosing a secondary school, not only children from excluded communities.

How exactly do your meetings go?

We usually start the meeting by telling each other what happened to us that day, or in the last period, in the last week. Mostly it’s about events from school, rather informal ice-breaking. Subsequently, we either continue what we did at the last meeting or start a new activity. We talk, for example, about occupations in the context of education, what advantages result from them, or how much we can earn in which position. We teach them to argue their opinions. Sometimes it really is enough just to guide the discussion and the children debate on their own. Other times we just sit and talk about, for example, how they were at school or what computer games they play.

How do teachers at the Elementary School in Petrovany perceive career counseling?

I think they perceive it very positively. The school is our partner. Over the years, we have been able to build a mutual understanding. The school offers the children a formal education, and we, on the other hand, offer the informal one. Together, we provide children with a more comprehensive view of education and teach them that not everything depends only on acquired knowledge, but also on skills, for example, the ability to ask questions when I don’t know something.

I’m glad that we don’t evaluate children’s progress only on a scale from 1 to 5, because progress is often not taken into account by the grade. The starting point of each child is different – a child from better circumstances just needs to do less to be somewhere else than a child from worse circumstances. I can’t imagine not having that kind of contact with the school because our jobs are basically overflowing containers. When we pour a lot into one, the other one empties, and conversely, if we overflow one, both will flow out, and that is not our goal.

Has it ever happened to you that someone came to you and said that, thanks to career counseling, he or shee improved, for example, in mathematics, because he or she will need it in his or her further studies?

As part of the Smarter Together project, we had three fantastic tutors here who worked with the children on an individual level. Then the children’s grades visibly improved. Both parents and children said that thanks to the individual tutoring, their grades improved, and the children tended to make less excuses for not attending the school or not doing their homework. By having better results, they prefer to go to school because then they do not encounter negative and destructive criticism as often.

What about adults, for example?

Career counseling is for everyone, including adults who, for example, want to change their job because they don’t like their current one. During the session, we find out why they don’t enjoy their work and what they would enjoy on the contrary. Meetings with adults usually take place individually, because they are also connected to job counseling. Career counseling is more focused on direction, finding one’s interests and what one enjoys, while job counseling is more about mapping the experiences and available resources that the person has. For example, we ask about goals or previous practice. Adults usually already have some financial obligations, support their family or themselves and need to be financially secure.

Could you share with us an example of how career counseling changed a young person’s life?

We had a boy here who, in the seventh grade of primary school, decided to drop out and start doing heavy digging work. But he quickly realized that it was better to finish his education than to do hard physical work without contract. Meetings with us during the summer contributed to the fact that he decided to enter the secondary school of gastronomy and services. He learns a lot of practical skills there and when he graduates, he will be an assistant cook or a helper in the kitchen.

Do you think that career counseling should be part of all schools?

I think this is a very important question. It does not concern ethnicity at all. Children from the majority society also have problems with choosing a secondary school, not only from excluded communities. Even children outside excluded communities from the middle class may encounter the fact that their parents do not have much time for them due to their work.

On the other hand, not all children from excluded communities do not know what they want to become. So to imagine that career guidance is only for children from marginalized communities is stigmatizing. Career counseling is very useful because it provides an opportunity to acquire skills and knowledge that are not available in school education. This concerns, for example, the development of communication skills or personal development – learning to think critically about one’s own needs and motivations.

Anyone can come to us for career counseling and they don’t even have to introduce themselves, as we are a low-threshold center. Everyone can find something they enjoy in the center or a person they can come to and talk to.

Project LDI03023 „Development of career counseling skills for social inclusion“ is supported by Norwegian funds and co-financed from the state budget of the Slovak Republic. 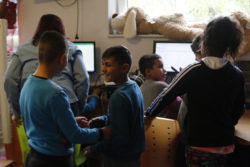 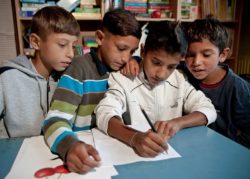 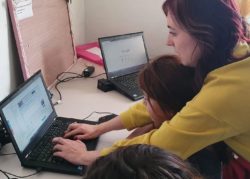 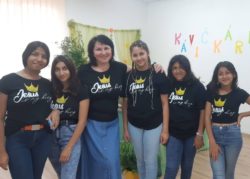 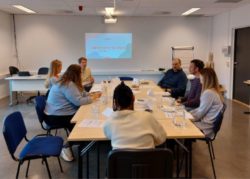 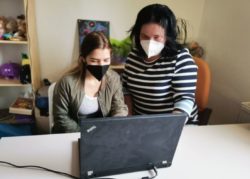